9 ACTIVITIES FOR THE PERFECT WINTER 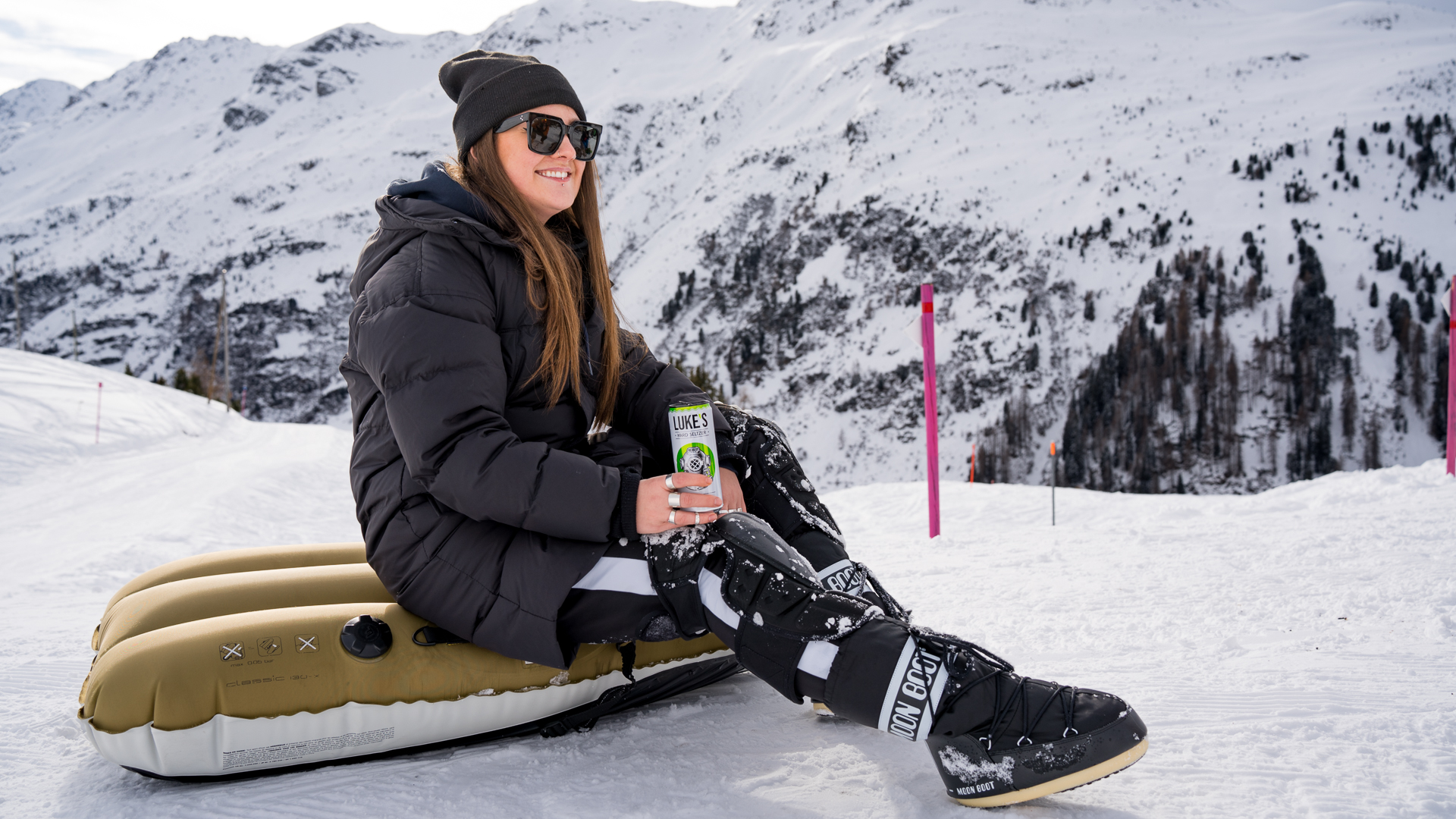 Are you bored of sitting at home? LUKE'S presents nine adventurous activities for your winter that you shouldn’t miss. Are you ready?

Anyone can build a snowman, let’s build a LUKE’S-man instead. He looks the same as a regular snowman, only he has a cold LUKE’S in his hand. He definitely knows which is the best Hard Seltzer! Toast with him and treat yourself to a LUKE’S too. 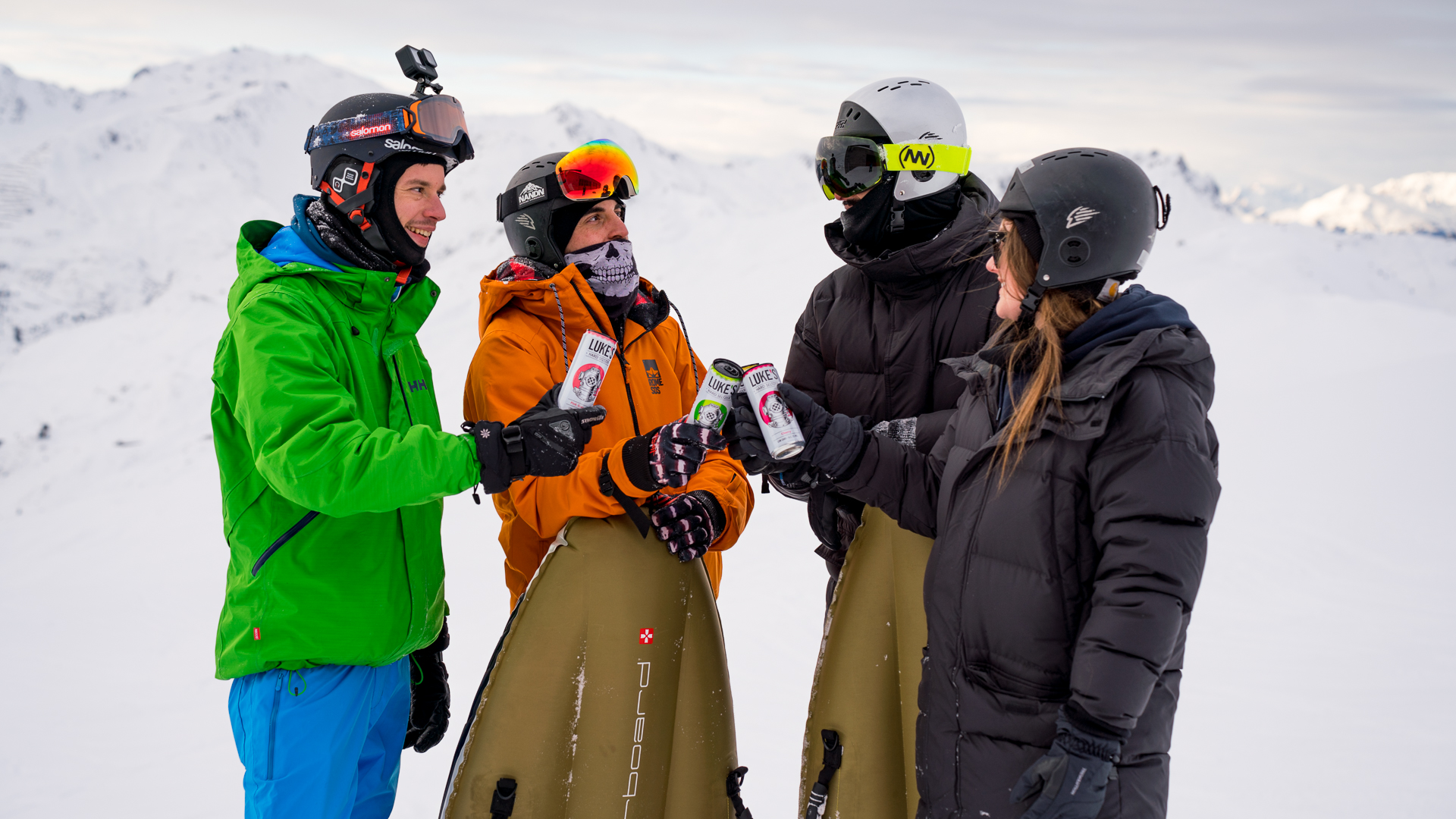 We know that LUKE’S tastes best ice cold, but how about you? Are you a wimp or do you dare to jump into the cold water? Challenge your friends and jump into the cold water. Not only does it toughen you up, it also improves your blood circulation. But the best part about winter is that your LUKE’S for sure will not to get warm! But be careful, take it easy when ice bathing, we don’t take responsibility for hypothermia.

Tobo-what? Tobogganing – honestly, we don’t know exactly how to pronounce it right either. What we do know is that it’s a lot of fun. You slide down the differently prepared slopes with an inflatable tire tube. This is also called snow tubing and is guaranteed to be an action-packed descent. If you want to experience it for yourself, you have to travel to Leysin in the canton of Vaud. There, besides tobogganing, many other winter activities await you. Read more.

What would a winter be without a good snowball fight? Hard to imagine. So, get your friends out and let the snow fly. If your friends won’t get out, just bring the snow to them. The most fun of a real snowball fight is when you form two teams, and they have half an hour to build a fort. After that, the goal is to capture the opponent’s fortress. The team that lost invites the winners to a round of LUKE’S Hard Seltzer.

6. FATBIKE RIDING IN THE SNOW

Have you ever ridden your bike in the winter? It can be a pretty slippery adventure. Not with a fatbike, because they have a lot of grip, even in the snow. You can ride down the mountain in various places in Switzerland. If that doesn’t sound like fun, we don’t know what does.
There are even fatbikes with battery, so you don’t only have fun downhill, but also larger tours can be part of your adventure. You can rent fatbike in different places all over Switzerland. Among others in Davos or in Lenzerheide. We recommend booking them in advance, as they are very popular especially on weekends and during ski vacations. 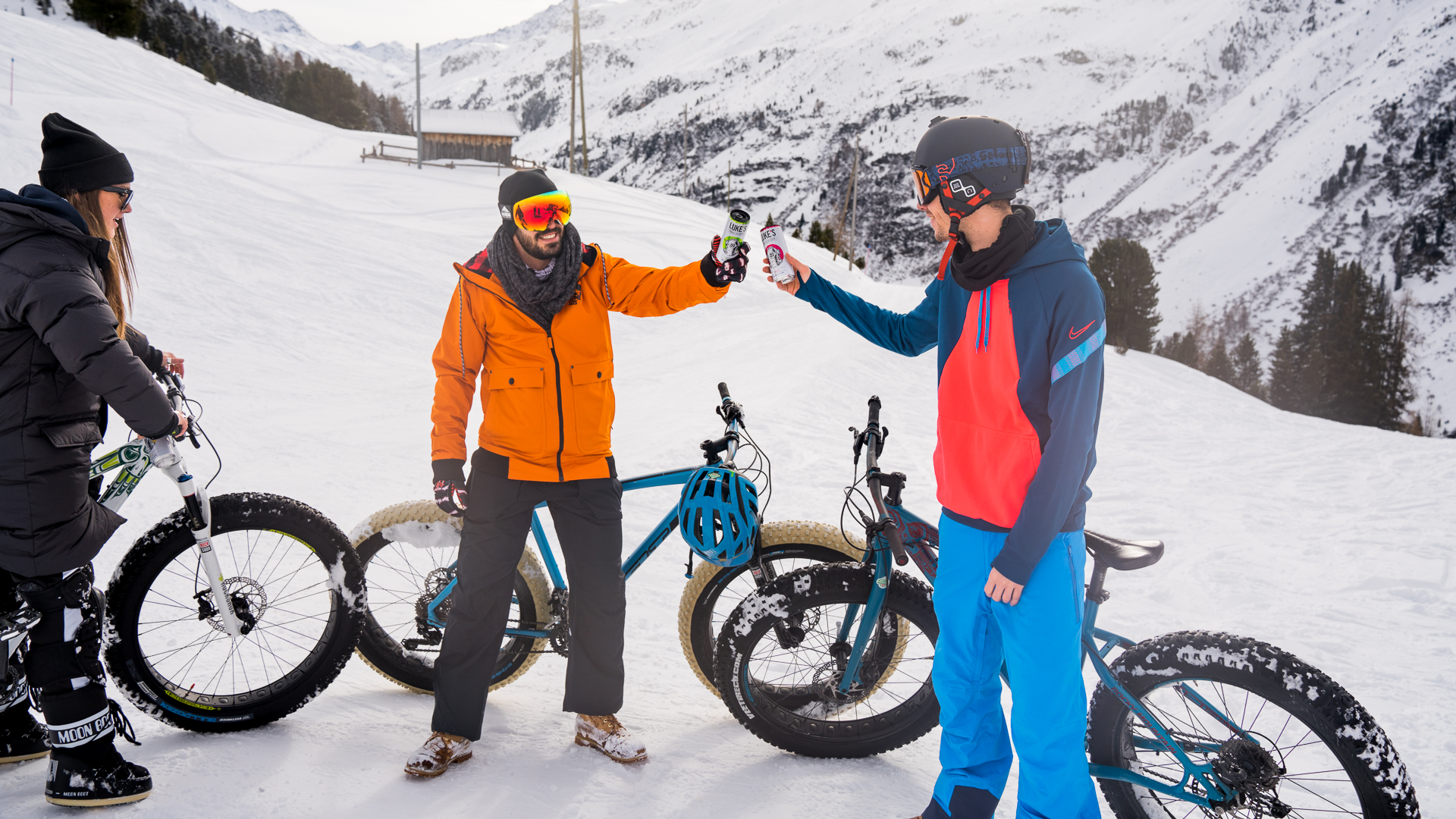 Almost everyone can sled and it’s fun, we agree. If you want something more than just sledding, we recommend night sledding, which is already offered by many winter sports resorts. Enjoy a delicious dinner and then sled down into the valley.
In Lenzerheide there is a particularly cool downhill run with the Light Ride. Every Wednesday and Saturday the toboggan run becomes a racetrack. Compete with your friends and whoever collects the most points wins.

If ice skating is too boring for you, then try Chneble. Chneble is a Swiss German word for ice hockey. Chneble is all about fun and anyone can join in. On most ice rinks you can chneble at certain times. Check with your local ice rink to figure out when the ice is reserved for chneblen, round up your friends and throw in the puck. After the chnebeln, of course, toast with a LUKE’S. 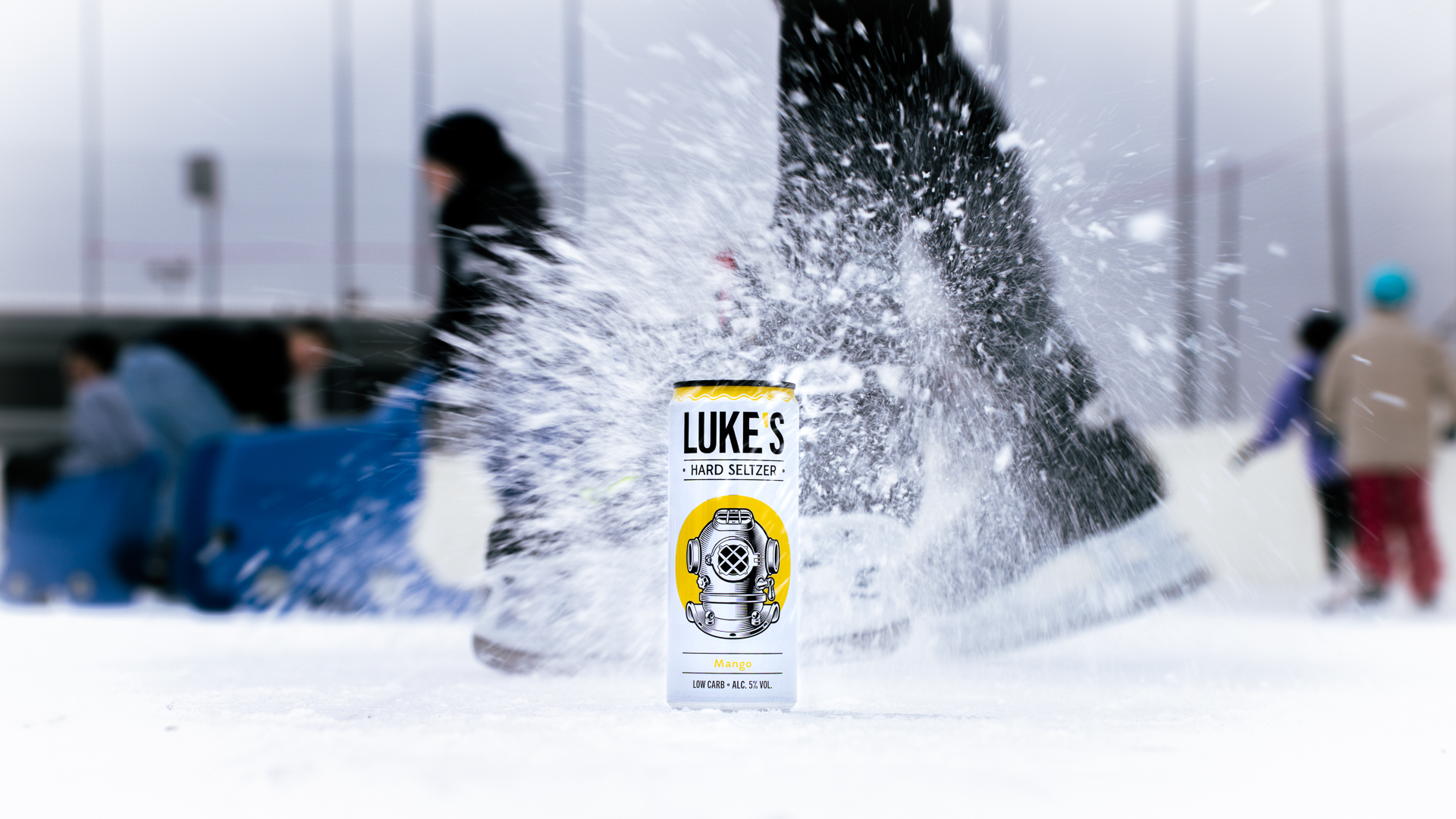 Last but not least, of course, it’s time for après-ski. What would a winter day be without a proper après-ski at the end? LUKE’S Hard Seltzer is by your side even after an active and adventurous snow day. And with LUKE’S you can sing along to every après-ski hit, we promise!

Do you have any other tips that belong on this list? Then send them our way on Instagram @lukshardseltzer.

We say “Dive In Winter” and hope you have fun at your LUKE’S at the next après-ski party. Cheers! 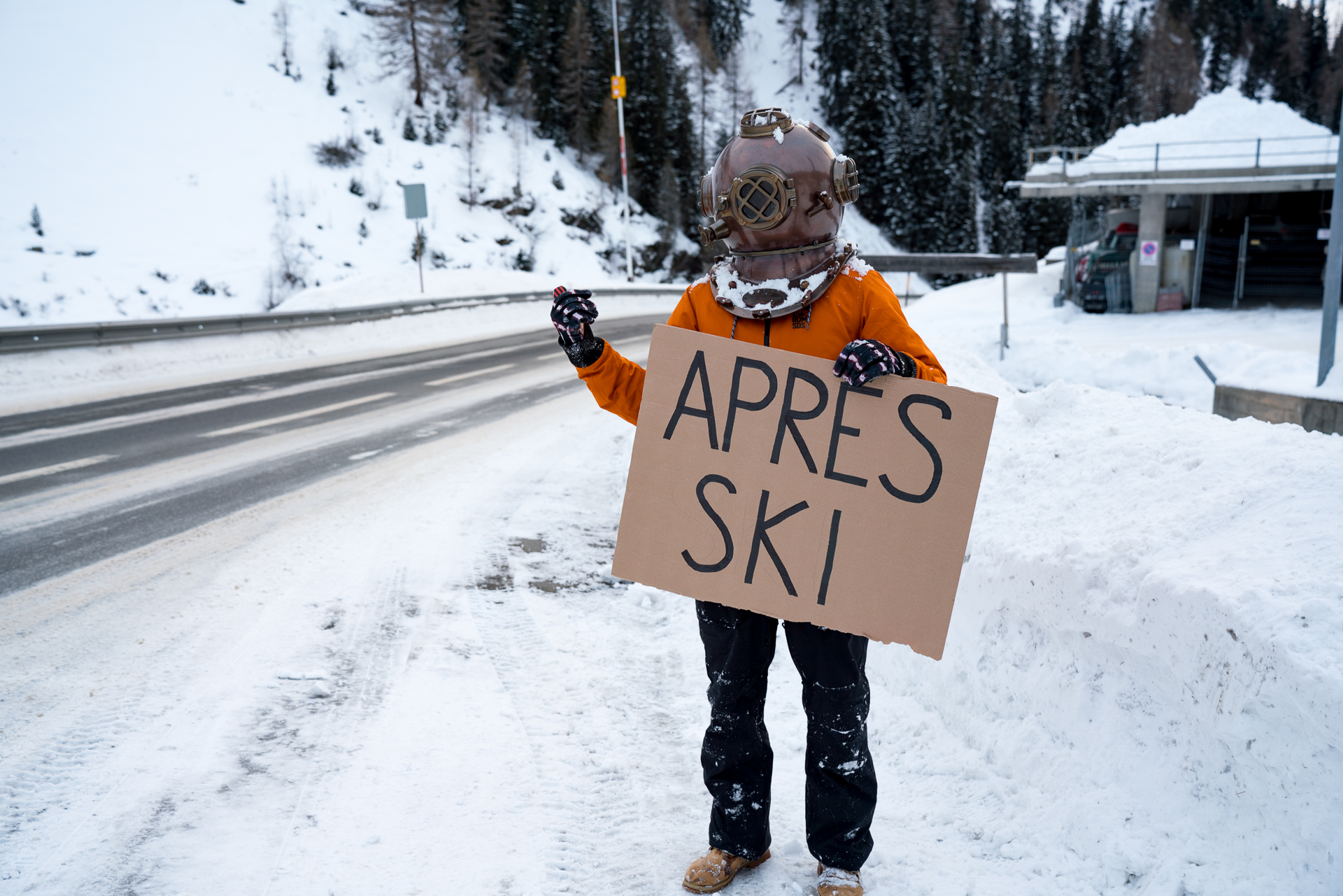 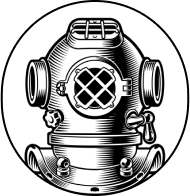 Are you legally allowed to drink alcohol?